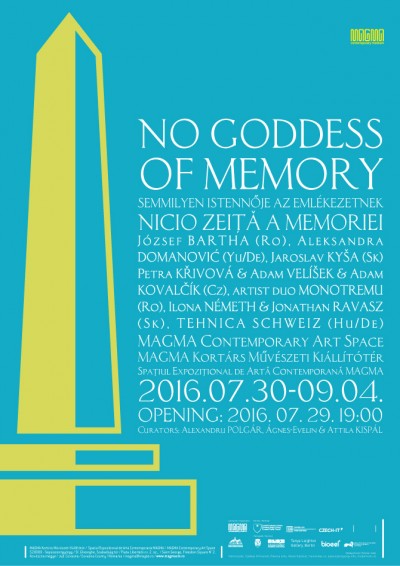 NO GODDESS OF MEMORY
group exhibition at MAGMA

In their everyday practice monuments tend to disappear. They stand in city centers, in front of certain buildings or on heights, where they are part of the inevitable landscape, duly ignored by regular city dwellers and waiting for some kind tourists to be seen again. To be a monument means to be ignored while opening up a space (often imperceptibly) – to rest in the oblivion of the habitual.

Ancient symbols of power, myths that once structured a living experience, signs of gratitude and remembrance, monuments are some sort of material unconscious, always too blurry to be interpreted clearly, always erected as some strange statements one cannot avoid, positions, theses. Their erection stands there to be contemplated by all – this is what monuments do first and foremost. They call, impose, build a there. They force the goddess of memory to bless them with permanence, as if they knew nothing of vulnerability.

The relationship between art and monuments is manifold. Not only that some artists are needed to make / conceive a monument, but the latter is also some sort of magnet, calling for intervention. It is a privileged space where visibility is augmented and every gesture receives a grammar. Paradoxically, insofar as each artistic intervention on a monument builds a work, a secondary monumentality starts to frame the initial “there” of the monument, haunting as an always topical question: to which extent monumentality is a necessary requirement of all work of art? And what does this mean in an era when the rate of forgetting exhibitions and works of art is at its highest speed, in the overarching digestive system of entertainment?

Artworks are attempts at defining what is memorable. What deserves our attention and (sometimes) requires thinking. When dealing with monuments, every artistic gesture effectively re-makes them to a certain extent, passing the past to us, the viewers. The vivid diversity of such gestures speaks of the impossibility to close the past in a unified memory, be it divine or profane. Monuments become rather means of expression for a number of concrete messages. Their intricate debate constitutes no monument for Mnemosyne. Instead, it shows the Brownian movement of flying around some luminous points in which the past is concentrated, as some insects would do around a source of light when the night of memory falls.
Alexandru POLGÁR