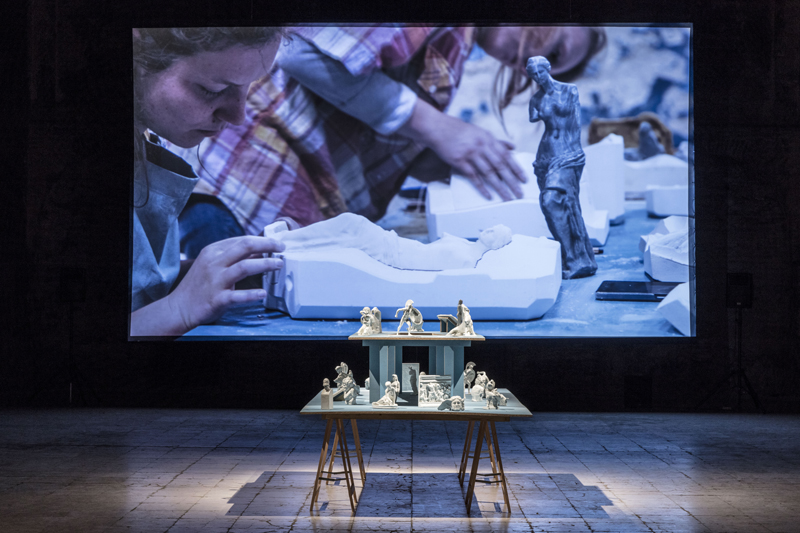 The Blue Room / an exhibition by Tehnica Schweiz (Gergely László and Péter Rákosi) at the Church Hall of Kiscell Museum
Vernissage: 18 June 2019 / 18:00

The artist duo Tehnica Schweiz (Gergely László and Péter Rákosi) have been collaborating for more than 15 years. They are interested in stories, buildings, locations and communities with a relation to cultural identity. Their research-based ‘conservation’ work is more than a mere analysis of the patterns of collective memory: in the course of diverse collaborative creative processes, they make attempts at the playful recollection.

The Blue Room is aimed at the re-examination of our relation to architectural and material cultural heritage, merging two stories: on the one hand, the story of the Hungarian Museum of Fine Arts’ 19th century plaster cast collection of antique sculptures, and on the other hand, that of the 18th century synagogue of Tata, which served to house the exhibition of life-size copies of antique sculptures for more than forty years.

The Blue Room comprises a film and an installation at the former synagogue. In the film, conservation specialists are seen detaching the plaster sculptures from their pedestals before disjointing and boxing them to be hauled away. The building is gradually evacuated, only to be occupied anew by a group of art students who transform the space into an atelier to craft small porcelain copies of the antique sculptures, giving rise to an entirely new collection from the accurate miniature replicas of the plaster copies.

The film documents an artistic intervention that repurposes the empty building, transubstantiated into a memorial of itself once the collection is moved out, with a new temporary function: a porcelain manufacturing workshop. Purchased with public funds in the 19th century, the antique replicas also used to serve educational purposes: art students copied antique sculptures in order to acquire the formal features of a universal beauty ideal. Today, however, young artists are engaged in a workshop of entirely different character; the sculptures once inhabiting the building appear in a different quality (material, size).

The project by Tehnica Schweiz was first exhibited at the former synagogue of Tata, incorporating various discourses related to the place. Before World War 2, 10% of Tata’s population of 12 thousand residents were of Jewish origin, with several craftsmen and merchants amongst the members of the assimilated community. The better part of Tata’s industry, including the carpet-, leather-, and brick factories, was in the hands of Jewish tradesmen. A prominent figure of the town was the Jewish factory owner Mór Fischer (1799-1880), the man who brought the porcelain factory of Herend to success.

The installation now moves to a new location, the Kiscell Museum’s Church Hall.

A subsidiary of the Budapest History Museum, the Kiscell Museum is a repository of colourful objects and artworks from the capital’s history. Serving to host temporary exhibitions, the limited edition porcelain figurines enter into relation with the massive dimensions of antique plaster statues as well as the vast space. The synagogue is represented not only in the film, but also in the church space: the architectural scale model built as a display stand for the porcelain statuettes evokes the former abode of the antique replicas in terms of both its material and design.

Through the theme of multiple transfer and recycling, the, The Blue Room demonstrates the constant transformation of the vestiges of our history and art, while attempting to reexamine our complex  relation to cultural heritage.The porcelain sculptures were made under the guidance and with the contribution of Edit Kondor, Zsuzsa Bokor, Mónika Csák, teachers of the Product Design Department at the MOME University, by MA students Henrietta Bodnár, Gabriella Farkas, Bernadett Fúró, Boglárka Nagy, Ágnes Nagy-György, Barbara Szőke,.

Composed by violist and composer Viktor Bátki, the music of the film is a fusion of ancient Greek and Hebrew melodies. Its leitmotif is a combination of an ancient Greek enharmonic tetrachord scale of four notes (two major thirds and two quarter tones) and an ancient Greek tune fragment. The music was recorded by Bátki using an acoustic viola and a six-string electric viola, with effects pedals. With the help of these instruments, he imitated ancient plucked string and wind instruments as well as atmospheric noises. The bass track pulsating through the first section of the score comprises the phrase TATA in terms of both rhythm and pitch (in solfege terms: 2 quarter notes = TA-TA; in relative solmization: the B note can also be referred to as ‘TA’).
Curator of The Blue Room exhibition: Eszter Lázár, art historian

The Blue Room at the Night of Museums
Adaptations for The Blue Room: materials, qualities, stories